On Tuesday, I drove from Melbourne to Avoca to visit their primary school to talk about ‘Meet the Anzacs’. Over Tuesday and Wednesday, I presented to all grades and finished up with a presentation to adults at the local library.

As always, there are questions that make me laugh (Can I have some more of that hard tack biscuit? It’s yummy!), some that make me want to cry and the one that stumps me. Sometimes I’m stumped because I don’t know the answer, sometimes it’s because of the depth of their understanding. And there’s never, never enough time. The Grade 5 & 6 class wrote poignant poems about the 24 hours after learning their war is to begin. They also tested me on Army leadership structure. Luckily, I had notes and could answer their questions! Every class was prepared and keen to learn. A joy to be there.

In between, and overnight, I was reading Sally Murphy‘s new book ‘1915‘.  ‘1915’ begins where ‘Meet the Anzacs’ leaves off, overlapping its first few days with the last few in my book. I liked that her main character, Stan, had a twin sister, Elizabeth at home in Bunbury who was teaching his class while he was away. This allowed the reader to know the effect of his enlistment on those left behind. Stan is a thoughtful and level-headed bloke, who makes friends readily and who is prepared to do as he has been asked, despite the challenges that presents. I did have to stop reading on Wednesday morning, or I would have had red puffy eyes leading into my school sessions. I think I would have struggled to talk about Gallipoli at all. Sally uses a variety of techniques to include many viewpoints on war. There are those of soldiers, of his parents, his sister, of ‘enemy aliens’, and of the Turks. War correspondent, Charles Bean, has a word or two to say as well, and there is discussion about what will become ‘The Anzac Book‘. Stan is a teacher, a brother, a son, a poet and a young man trying to make sense of war while simultaneously trying to survive it. I was cheering hard for him and holding my breath. Congratulations Sally on a fascinating and moving novel for young readers. 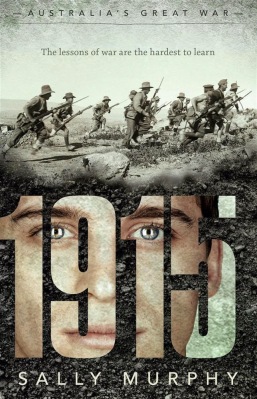 To Anzac Day. Tomorrow, at about 10.40 am, I will be ‘appearing’ on ABC Melbourne, as part of the live broadcast from Fed Square in Melbourne with Jon Faine, to talk about ‘Meet the Anzacs’.

2 thoughts on “Leading up to Anzac Day”