My friend Jackie and I went to Little River on Tuesday afternoon/night to help researcher Amy find some criticially endangered Eastern Barred Bandicoots. Shame we picked the coldest April night for years to do it. Here we are rugged up and ready. We located five already radio tagged bandicoots in the afternoon, asleep in their shallow ground nests. Once night fell and the bandicoots woke, we tracked them again (much harder to track a moving animal!). We also tagged a new one…now called Saxby! We checked nests again in the morning and found another one…taking refuge in another bandicoot’s nest. That one’s now called Kerin.

Next weekend features the Willylitfest, or Williamstown Literary Festival. There’s a huge range of sessions, including one at 1.15 Sunday with me, Corinne Fenton and Glenda Millard talking about the ins and outs, ups and downs of book promotion. Corinne has an earlier session talking about ‘the characters you meet’ and local writer/storyteller Jackie Kerin is on after us, talking about the oral stortytelling tradition.

There are heaps of other sessions…check them out here

We’ve just returned from a whistle-stop two week tour to New Zealand. There is so much to see, and although we tried to pack each day full, there was still so much we missed. It is a beautiful country with enough photo opportunities to please the most ardent shutterbug.

I kept a journal as I usually do when we travel. I try to just record events and thoughts rather than trying to write poems or store story ideas, although these sometimes creep in. For me it’s like planting seeds I guess. When I’m recording, I have no idea which, if any, will take root. At the very least, I can relive the journey.

This photo is taken on a beach near a river mouth. The steep-sided rocky mountains have ‘tree slides’ rather than landslides and the debris is tumbled by the ocean before washing up on the beach. Driftwood heaven. River rocks are softened to these beautiful shapes.

This wharf, this town were once bustling with whaling activity. The buildings lie empty, the rail tracks rust.

We saw several steam tractors like this one on the road on our first day. Surely they weren’t still in use? But no, they were on their way to a steam tractor meet, of course. This one was towing another and behind that a gypsy-like trailer. Several of them were towing these trailers, we presume for sleeping in. They weren’t travelling fast. 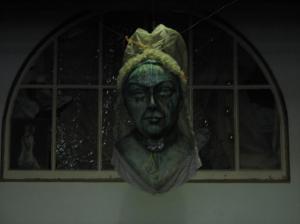 This bust of Queen Vic was suspended from the ceiling in an opera company warehouse. She’d keep everyone in line, I think.

In Christchurch, a series of these cast busts are outside The Arts Centre. They are of significant New Zealanders. It was nice to see Margaret Mahy recognised there. 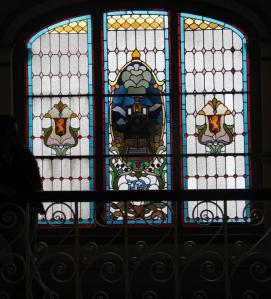 Homage to the train! The station which featured the above stain-glass window and the tesselated floor below is apparently the second-most photographed building in the southern hemisphere (after the Sydney Opera House) 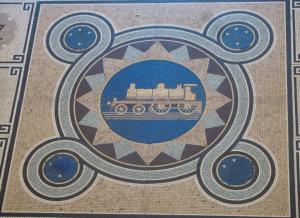