Last night I went spotlighting. Thank you to Amy, who hosted me at Mt Rothwell. Amy is part of the recovery team for the Eastern Barred Bandicoot (EBB), trying to bring it back from the brink of extinction. A tough and ongoing challenge.

As soon as dark permitted (and animals were awake) Amy drove and I wielded the spotlight, in the search for the elusive EBB.

This morning we were up before dawn ready to check the traps Amy had laid out yesterday. Again our target was EBB, but Bettong 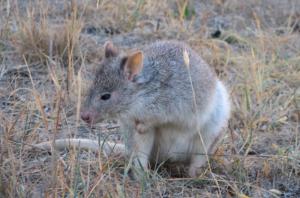 seem to like the sweet and chewy bait, as did Quoll 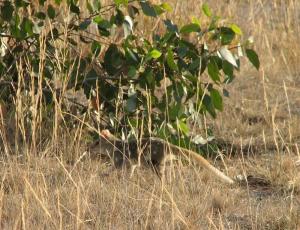 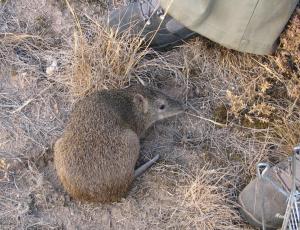 We did find two EBB 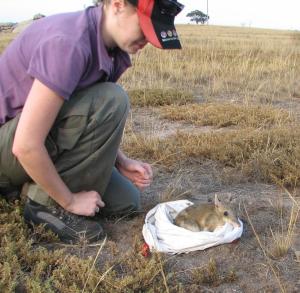 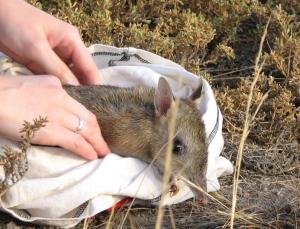 and Amy weighed, measured and health-checked them before releasing them. Some of the captured animals were keen to leave and hop-raced away as soon as the cage door was lifted. Others were happy to stick around for photos.

Fantastic. There was also an amazing sunrise.

…and east. These sunrise pics were taken in this order, with less than half an hour from first to last. Difficult to believe how the colours change. 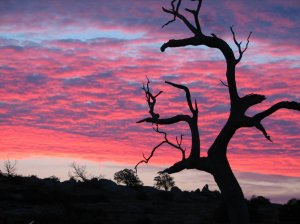 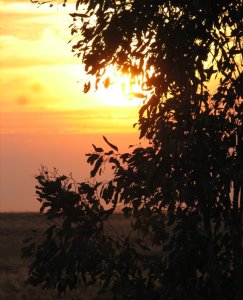 See the traps in the foreground below? They are laid out in patterns calculated to catch not only the early-dusk emerging animals, but also the later-rising EBBs.

What a place! The Mt Rothwell site is fenced to keep out foxes and feral cats. It’s almost completedly rabbit-free too. I reckon we’ve driven past this place with no idea of the population within. I’m hoping I’ll have a chance to visit again.

Tiffany Mandrake is guest blogger here today. She has just released the first two titles in her new ‘The Little Horrors’ series. I asked her to explain the difference between pitching a single title and a series.

Thanks, Claire, for inviting me to be guest blogger at your blog! As a resident at Hags’ Abademy of Badness, I’m something of an expert on logs and bogs, but blogs are somewhat of a mystery. (I just started my own, so this is good practice for me.)

Today I’m going to talk about the difference in pitching a single title and a series. My closet cousin (who helped me with my pitch to Little Hare) says I’m not allowed to talk about hexing editors and sending my cat, Speedwell, to wee on their keyboards, so I’ll pretend I’m an ordinary writer instead of an extra-extra-inordinately-unordinary one.

When pitching a single title, you need to pitch a high concept of about 25 words that makes your book-to-be sound like the best thing since pickled nightshade. It should sound like something a reader just HAS to read. Consider these high concepts.

They all refer to the same story, but some sound much more dramatic than others. Pick the one that hints at page-turning potential.

When pitching a series, you need to consider, and specify, the kind of series you propose. Is it a series where a protagonist moves from adventure to adventure, learning, aging and changing, or one in which the protagonist stay the same age and never change? Will the episodes be self-contained, or will each end on a cliffhanger as they build to a final goal or ending? Will the protagonist(s) be the same in each book, or will heroes and heroines come and go?

Some series are “closed” from the start, such as the type which tell virtually the same story from different points of view. Some are planned as trilogies, or as seven-book cycles. Others are open ended. If you plan a finite series, or an open ended one, you should mention this in the pitch.

In most cases, rather than just a plot, you’ll pitch the environment for a series. Your setting, or “series world” is generally a constant in each book, and it must offer variety and plenty of possibilities for more than one story. The world might be as small as a house (remember The Royle Family? Almost every episode took place in a single room) or as large as a galaxy or time. If the series world is large, it will almost invariably have a small constant as well. Consider Doctor Who. The Doctor can go anywhere and to any time, but his “constant” is the TARDIS. It is the environment to which he returns, and in which readers/viewers find him most recognisable. The characters in Sally Odgers’ Space Sports series might travel to another planet, but they will always return to Space Station Nova, and the social politics of Nova will always affect their actions. Remember these examples in your pitch for a series, and think it through before you send it off to ! an editor.

Begin with a concept such as “dog wandering the galaxy”, “country child in the city”, “new girl at progressive school” or “survivors on an island” and then move to series specifics in character and plot. For example, “dog wandering the galaxy” might be fleshed out to become “genetically altered dog, sole survivor of a meteor disaster, joins the star ship Valkyrie and proves his worth in every new adventure”, or “dog, accidentally left behind at a check point, continually boards new ships seeking his master”. In each case, the dog is alone, but in one it has a new constant environment (the Valkyrie) from which to have adventures, and in the other, the ships and companions change in each story while the constant is the dog’s search. In one, the adventures are the point of the stories. In the other, the adventures are almost incidental to the main quest. The series pitch could go either way, or take a completely different track! , but the pitch should make the commissioning editor aware of what the constant will be.

As well as a place, time or situation constant for series characters, there will often be characters (villains or friends) which will reappear from book to book. If Zac meets his rival Henry in Book 1 of a series, and befriends him, then Henry may appear thereafter as a friend. However, if Zac and Henry remain rivals (or enemies) at the end of Book 1, then Henry will reappear from book to book as a rival or enemy. This is something else to consider in a series pitch. Will relationships remain steady (protagonist + sidekick + mutual enemy + killjoy cousin) or will they change and develop, so an acquaintance in one book may become a good friend in another, then fall out with the hero in a third and be a distant enemy in a fourth?

It is in these variables that the true difference between pitching a single title or a series lies. A series may make readers feel comfortable as they adjust to the rhythm of the storytelling and recognise the constants, but it may also stretch belief almost to breaking point. If a ten-year-old protagonist escapes kidnappers in Book 1, readers might swallow his one-off display of skill and luck. If he escapes an earthquake in Book 2 and a shark attack in Book 3, the pattern emerges, and the adult reader, if not the child, starts to wonder how many death-defying adventures this kid will have before his putative eleventh birthday. If he has a broken leg at the end of Book 3, and is abseiling up a mountain in Book 4, many readers will start counting on their fingers to see if he has had enough time to heal.

To make this kind of series even slightly believeable, the author must pitch the constant convincingly. WHY does Ben get into these hair-raising situations so often! ? The constant must answer this. Perhaps Ben is a millionaire’s son, an intelligent and top secret robot, an alien, heir to a pirate king, under a curse, a political orphan, a young crusader, a fugitive from villains… the answer could be just about anything, but it must be strong enough to override the disbelief. It must support not one single story, but as many as the series will bear. Obviously, the more domestic and low-key the adventures, the less fictional time need pass between each one. The series set up can be adjusted to allow for as many adventures as necessary.

Fantastic answer Tiff. Now I’m off to fix up my series pitch…

Tiffany Mandrake will be guest blogger here on Tuesday as part of her blog tour to promote her new series, ‘The Little Horrors’. The first two titles are ‘Flax the Feral Fairy’ and ‘Mal the Mischievous Mermaid’. The series is published by Little Hare. 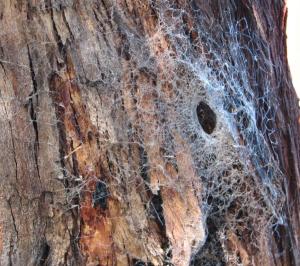 I found this web this morning. I think it’s from a brown tree spider but I’m not sure. Amazing.

Some things are hard, some things are easy. The boy who helped me with my kitebuggying article is home again and fortunately still has the same email.

The magazine is on its way.

I was in the library yesterday, copying the roughs for Sheep, Goat and the Creaking Gate to use in school visits. I always check in the picture book section to see if my books are there. If so, I make sure they are visible. If not, I smile because it means that someone has borrowed it.

Anyhoo, there was a mother madly foraging through the chapter books with a rolled up newspaper beneath her arm. She pulled the newspaper out and checked it. That’s when I realised it was the Premier’s Reading Challenge list for 2009. I remembered then that the list was to be included in 15 Feb’s Sunday Age, and went scurrying home to drag the paper out of the recycle bin. I found the list and checked it for my titles and for those of friends.

It’s a great thing for readers this challenge, listing so many books they might like to read. It’s a great thing for writers/illustrators to have their titles included on the list. Not sure librarians are so excited by the list, as no list can be completely inclusive and there are plenty of other good books on the shelf. But any initiative that guides a few more children into a longterm reading habit is a good one I reckon.

The smoke has spread now and covers the whole city –
all the way from the still-smouldering hills
to my seaclose home.
I welcome the smoke, inhale it
taste what the televisionsradiopapers feed,
seek to share some tiny association
with those who have lost everything and more.

It’s not possible. I know that
and the page 5 piece from the survivor of another fire
makes sure I don’t forget it – her no longer numb-or-dumb anger
spills forth to damn me and all my neighbours.

Newspapers and radio
people the wasteland with details
of near-deaths and near-escapes.
It clears the air and any connection
I may, for a second, have imagined.

There is no link
I have my home, my family, my neighbours.
I close my eyes and breathe the smoke one last time
before the lifeheavy breeze carries it away

Claire Saxby
Create a free website or blog at WordPress.com.